Michael Gossack is the owner, printer and blogger behind the popular MY3D Agency blog.  His busy downtown Toronto print-shop specializes in making lifelike human figurines.  Leaders in the field, Michael and his staff design, scan, 3D model and produce the highest quality 3D printed figurines in the city.  Their blog is filled with original pictures and behind-the-scenes accounts of their jobs, and gives an authentic glimpse at the inner workings of their busy 3D print shop. 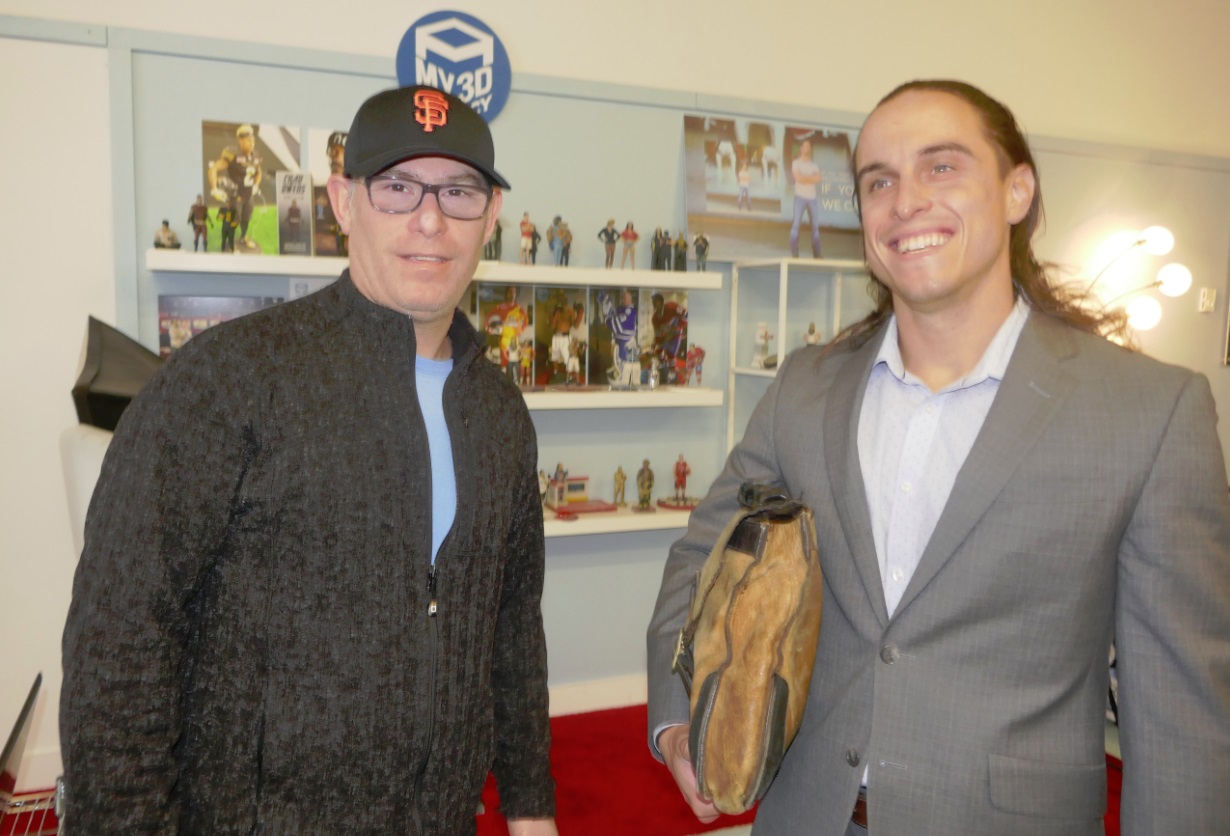 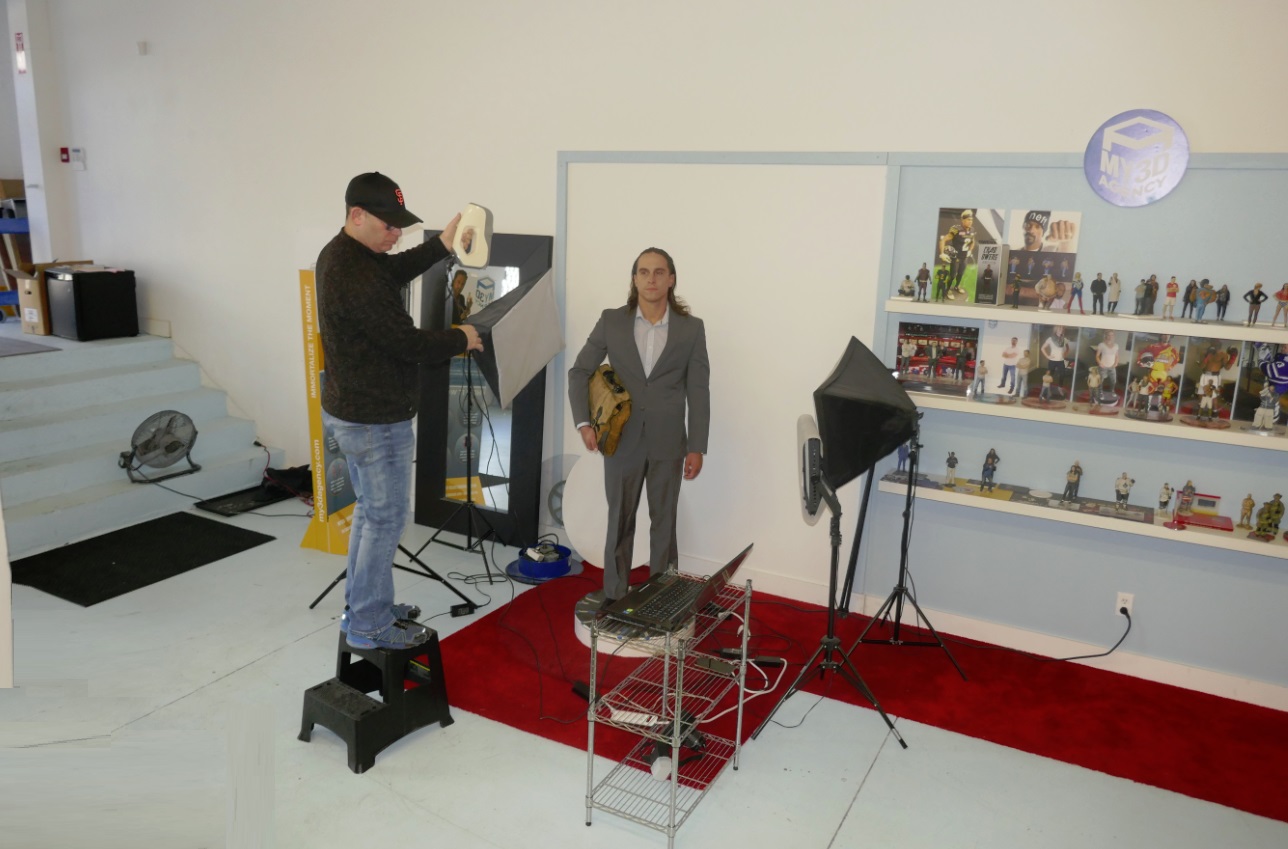 Michael uses a sophisticated 3D Artec hand scanner to acquire the best possible three dimensional images of his subjects (humans, animals and objects). He then uses increasingly complex software to make the desired 3D print files.  Setting up a print-run on his state-of-the-art 3D printer in the back of the shop is the last part of the process.

The machine prints images into full-colour solid things using gypsum powder, binder and paint, and Michael usually sets this up to happen overnight. Then in the morning he cleans, boxes and ships these prints to customers all over the world.

MY3D Agency blog gives behind the scenes accounts of their staff scanning and printing major celebrities, but also shows the sausage-making elements of switching print solutions, updating software and replacing certain pieces of equipment. There’s a whole post on properly cleaning their printer’s intricate print-heads. Below is an image from a wonderful, first-person past tense account of their crew out shooting new images for their homepage in ten degrees below zero weather. The blog relates how staff members packed up some figurines and trundled off down to Cherry Beach to seek the perfect shot. They hoped to make a picture with small 3D printed people in the foreground and huge skyscrapers in the background that appear to be approx the same size – a nice idea.  They couldn’t get the shot at the beach because a massive ship blocked the view, but of course the view on the end of Polson St in Toronto is never blocked and that’s where they ended up getting the homepage images that so nicely showcase their product.

“We got lucky finding this spot; the cement harbour block is part of the retaining wall, and came made-to-order for our photography shoot.” Michael writes. “The block’s red graffiti spray paint added some nice colour in the foreground of our shots”.  The figurines are both superheroes, the one on the right was made for some TV show or another, while the figurine on the left is Laura Bilotta. Laura visited the shop in February 2o18 and she blogged about getting her own figurine on her Single in the City blog in March.

Laura Bilotta from Single in the City is another rising celebrity with a book and an AM 340 talk radio show.   Michael writes that “Laura came in for a complimentary 3D scan and got a six inch 3D selfie statue that is honestly among the cutest little figurines we’ve ever printed.”  The blog is full of proud moments that are entirely sincere. 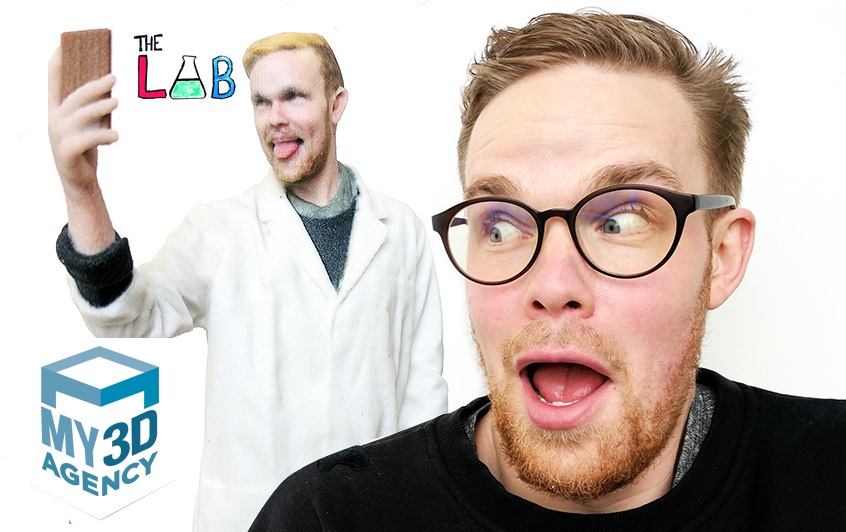 Mitch and Greg from ASAP Science recently visited My3D Agency. They made a YouTube video which shows them learning about the 3D imaging process and then posing while getting scanned . They got printed characters made of themselves. The duo have been creating science videos for their YouTube show, The Lab which has many hundreds of thousands of subscribers. MY3D also blogged about scanning recording artists Derek Wise and Drew Howard of 88GLAM.  These recording artists were 3D scanned to generate digital assets to be used for computer generated imagery (otherwise known as CGI) by an music video production company or multi-media entertainment (by which they mean video games) in Europe. Michael scanned these young singers in two different poses and he had each of them stand in ‘T’ pose position which makes it easier for other software to manipulate the files for other purposes later. Using this newly created digital asset it will be possible to make the stars dance or rap in fluid life-like motions in subsequent productions. You can see by the attached pictures that the digital assets look exactly like the photos of both artists. These 3D files transcend time and space; the producer lives in Europe and he was able to come to Toronto and have the talent scanned, and can now create his entertaining work (which will take many hours and lots of computer processing power) from home with his newly received digital assets. Michael also hints at scanning and 3D printing other much more famous rock star and rap artists, but non-disclosure contracts prevent him from boasting about it on his blog.

Sean Ward was 3D Printed as a Comic Book Hero

Sean Ward the comic book author and genius behind the Sean Ward Show on YouTube was also into the studio and got his likeness 3D printed, and now his story too appears on the blog.  Sean’s comic book superhero spoof videos have millions of views, and he is quoted on Michael’s blog saying he now lives entirely off the proceeds of his YouTube productions; he gets a cheque for a few thousand dollars every month with which he pays his expenses and finances his fun, creative life. Sean Ward from the Sean Ward Show on YouTube and Facebook is a new age home video star.

MY3D AGENCY custom-printed over two hundred and fifty small statuettes to embody the individuals who were confirmed as Campbells’ Souper Heroes in their recent advertising campaign, and social media outreach, where they asked the public to ‘Behold their Souper You’.  Michael’s blog celebrated their good work as the campaign came to a close, and everyone was ‘souper’ happy with the results, in April 2018. Here’s the story:  My3D Agency, a 3D printing company in Toronto got the nod to create a prize solution for Campbell’s Soup in September 2017.